Micro:bit is an open source hardware system designed by the BBC.

The size of a credit card, a micro:bit was provided to 1 million children in year 7 across Britain.

The micro:bit posseses a motion detector, 25 LEDs to flash messages, bluetooth technology, a compass and input/output rings to connect to other devices. The BBC worked in conjunction with partners such as Microsoft, Barclays and Samsung to develop the product

Micro:bit is an evolved product of the BBC Micro from the 1980s. It works by connecting it to a computer and coding lines to program the micro:bit however you wish, i.e a watch, a football game, automatic plant watering and so on. The device is compatible with languages such as C++ and Python and can work on any other device; smartphones, laptops, tablets.

An online compilation has to be made to then use the editor offline. A student can edit the code using JavaScript for example or the Scratch blocks, which is a visual-friendly component.

The Micro:bit Educational Program partners with academics and donates samples of the micro:bits to individuals or organisations across the globe.

Sue Sentance, Chief Learning Officer at the Raspberry Pi Foundation and prior Computer Science Senior Lecturer at King’s College London, conducted research in collaboration with the BBC’s Micro:bit, which serves to be the first study investigating its usability (Sentance et al., 2017). Another report ‘Teaching with physical computing devices' by Sentance et al (2017) refers to the same study but in relation to feedback for teachers. The interviews are sectioned into five areas which can be leveraged as indicators to assess when conducting my own feedback. The report also indicates the many ways in which the micro:bit can be ‘taught’ to students. For example, a ‘use-modify-create’ method was utilised by one teacher, where students read and then, edit the code. Another teacher used tutorials and students felt limited by determined activities.

Sufficient preparation is advised as imperative for teachers to combat reliance on worksheets. Ultimately a correlation was found between the confidence of teachers and their ability to inspire their students (this isn’t surprising but important).

The study segmented three approaches to teaching with physical computing:

Sentance also reports her work with micro:bits in Guyana. The micro:bit was introduced to two school where presentations and workshops took place within a week.

A teacher workshop took place to set up micro:bits and computers and pre-programming the devices. The teaching session included: Two student workshops for 11-12 year olds and 14-15 year olds focused on programming. A carousel approach was adopted (students move around four activities).

A report published by the University of Gothenburg examines ‘What is important to consider when designing teaching materials’ for micro:bits in Sweden. The report examines stakeholders such as the students (4th – 6th grade), teachers and government institutions who were all involved in the 21 workshops.

The paper similar to Sentance’s, examines theories such as constructionism, self-determination, and computational thinking. The methodology included an Empathy map, ‘Fly on the Wall’ observations, semi-structured interviews, journey maps and so on. Integrating feedback and iterations (somewhat similar to the delphi method) was also used a methodology, which can be leveraged for this trial in Eritrea.

The workshop feedback notes that children were motivated and eager to only play games (name badges) which can hinder the learning component. To combat this, a second revised workshop had a longer demonstration where the blocks were explained in greater detail and analogies (box/variables and values).

Researchers found ‘a mix of showing and doing’ is the best fit with ‘extra attention… explaining how the blocks work’. Further workshops adopting analog examples where students would physically play, as findings suggested those who had gone through the analog workshops found the micro:bit easier to work with.

17 students with 2 facilitators were encouraged to play with the editor for 10 minutes before using the micro:bit. Students programmed a step counter by co-coding with the teacher and their projector. Worth noting, this might be necessary to bring to Eritrea to compliment large class numbers. Co-coding allowed for a ‘useful hybrid’ between presentations and autonomous exercises.

The report lists the following examples to replicate via co-coding. This approach would be akin to the ‘Consumer/Provider’ approaches mentioned in Sentance et al’s (2017) study.

Table listing examples of exercises from the Gothenburg report

The report also illustrates a ‘scope of autonomy’ model to aid teachers of the distribution of autonomy between them and their students when using the micro:bit. This can also be mapped to Sentance et al’s (2017) observations on inspirers, providers and consumers, where inspirers would promote a larger scope of student autonomy and vice versa. 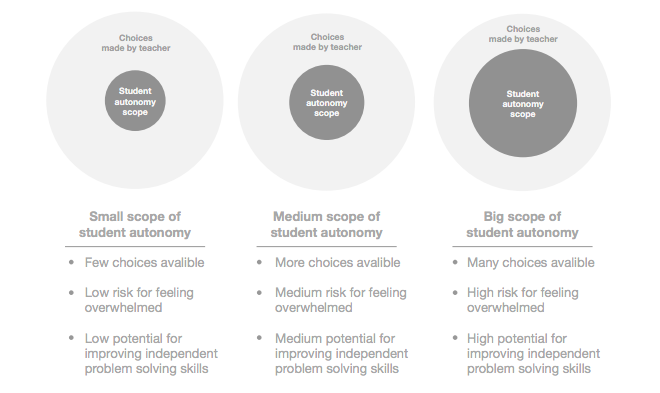 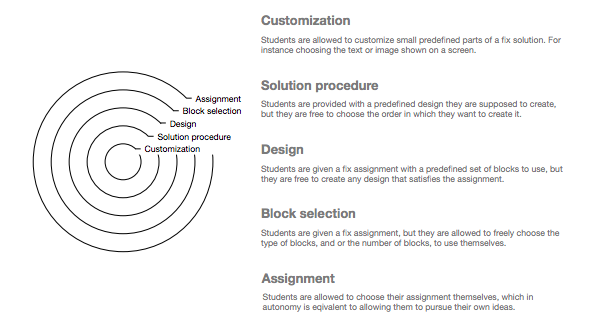 The images above have been dissected into the following with examples which can be considered as progress points for different workshops.

A second report from Gothenburg examines the ‘considerations and technical pitfalls’ of computational thinking with micro:bit. Below, are the reported errors and how I will try prepare for them.

Micro:bits have been trialed in many locations, spanning the UK to rural China and India, of which testimonials can be found online. I’ve condensed them so it’s easier to refer.

Based on the testimonials and the kindly shared research published from Sentance’s team and the University of Gothenburg, specific risks can be drawn as previously outlined.