Thinking about the relationship between makerspaces and refugee child development 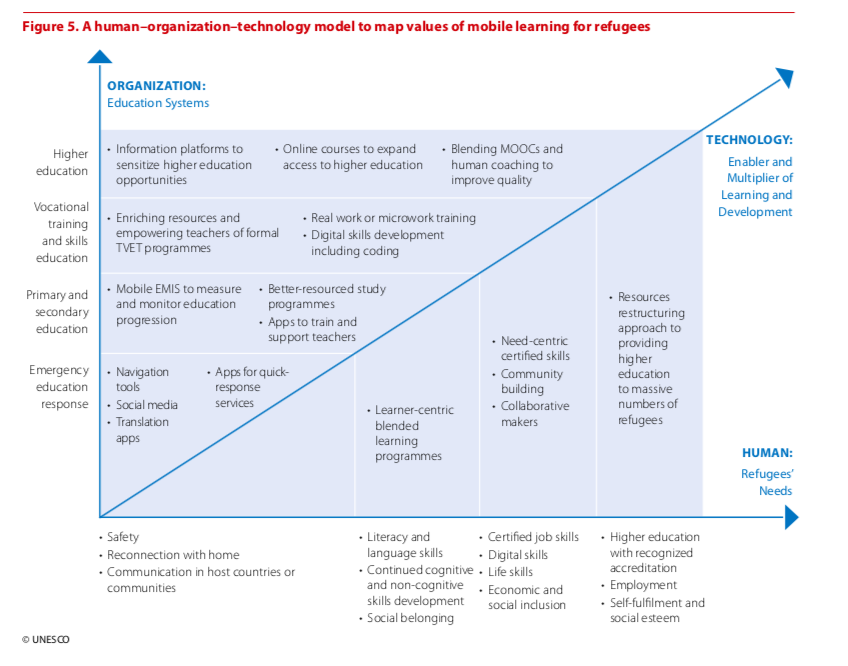 UNESCO technology and refugee development map
Makerspaces have grown in popularity, introducing people to a hands-on approach to learning as they tinker, invent and play. However, there is little evidence documenting the design and impact of makerspaces for refugee children. This work seeks to explore the ways in which makerspaces can serve refugee child development. It recommends the importance of measuring predefined impact goals, mapping impact according to a child’s development stage and studying outcomes of specific maker activities.

The Maker Movement is a growing do-it-yourself movement encouraging a hands-on approach to learning (Halverson et al., 2014). Where the individual becomes the ‘maker’ versus consumer, the movement democratises access to STEM (Science, Technology, Engineering and Math). Meritocratic by nature, maker culture is built upon the premise that anyone can make anything, based on MIT Gershenfeld’s ‘How to make (almost) anything’ course from which FabLabs (fabrication labs) and maker culture grew (Gershenfeld, 2008).

The Maker Movement builds upon Piaget’s constructivist approach to education, where a child’s learning grows from experience and observation (Piaget, 1945). Where Piaget viewed play as a sole activity, as the child constructs their own learning, a Piagetian approach alone neglects socio-cultural influences on cognitive development (Ibid). To contrast, Vygotsky valued the role of play in cognitive processes and the social nature of problem-solving (Vygotsky, 1978). A Vygotskian perspective compliments traditional constructivism, as play is viewed as expressing socio-cultural elements. Seymour Papert further developed constructivism into constructionism, emphasising the importance of interacting with media and physical objects such as computational materials (Papert, 1980). This project-based approach suggests the learner experience is most effective when constructing a physical product, ideals the Maker Movement is built upon.

Role of the teacher

In a Vygotskian approach, a child’s development is dependent on the interaction of a more knowledgeable other, valuing the role of a teacher or facilitator in an in/formal setting (Vygotsky, 1978). Lee and Worself (2019) argue that makerspaces succeed only when the role of the teacher is considered and there is an acknowledgement of pedagogical skills to facilitate learners. The researchers designed maker culture activities for refugees and found that debrief lessons for facilitators allowed for planning and an articulation of goals. As well as an opportunity to discuss pedagogy, debrief sessions also allow facilitators to become accustomed to tools, as studies show the more confident teachers are with the technology, the greater their ability to inspire children (Sentance et al., 2017).

UNICEF estimates there are 31 million children forcibly displaced and in an attempt to support a bottom-up design (from aid to empowering people to create their solutions) a small but growing number makerspaces have been established for refugee children (Betts et al., 2015; UNICEF, 2020). Nonetheless, there is little understanding of both design and impact of these makerspaces (Corsini and Moultrie, 2019).

Troxler and Maxigas (2014) outline four interpretations of the Maker Movement culture as a ‘1) bourgeois pass-time 2) innovation in education on technology 3) new renaissance reconciling liberal arts with science and engineering... 4) a new industrial revolution’. The first definition brings attention to the exclusivity of makerspaces. Waldman-Brown et al. (2016) question the inclusive nature of the Maker Movement in the West, which are attended by ‘privileged participants [..] usually white male, upper or middle-class’ with the time and luxury to experiment. The same researchers found that in Kenya, people working long hours at or below the poverty line were less inclined to visit if they do not see any immediate benefits (Waldman-Brown et al., 2013). The emphasis that perceived benefits must be translated is further supported by Chu et al. (2017) who explain that parents themselves must value makerspace learning to enrol and support their child.

The remaining three definitions can be deemed as overly optimistic. Tan & Calabrese-Barton (2018) recommend that teachers must avoid a ‘keychain syndrome’, a reference to children learning only how to 3-D print a keychain in maker culture. The researchers argue children should avoid makerspaces which are trivial and recommend youth engage in social justice orientated STEM endeavours, in order to become agentic makers.

An example of what Tan & Calabrese-Barton (2018) might be referring to in the context of encouraging refugee youth to build projects in response to their surroundings, is perhaps MIT’s Rethink Relief. Rethink Relief, a two-week design summit gathered researchers in Uganda to develop short-term relief exercises for refugee youth (MIT News D-Lab, 2014). This included building low-cost technologies such as a ‘Make Your Own Light’ kit or a method for medical recording in refugee camps. This echoes Lee and Worself’s suggestion that ‘Cultural contexts cannot be divorced from the design of informal learning environments and making because learning is a deeply socially and culturally situated activity’ (Lee and Worself, 2019: 6).

It can be argued that makerspaces built for refugees will cater to very different concerns. UNESCO’s 2018 ‘A lifeline to learning’ report calls for this shift from a ‘technocentric to a need-centric or resource restructuring model’ explaining that differing refugee needs vary from stage of development (UNESCO, 2018). For children who would be in primary education, learning should focus on improving literacy and language skills and cognitive development. For children who would be in higher education, learning should cater to employment or self-esteem. This supports Piaget’s theory of cognitive development which suggests makerspace activity must meet children at their approach stage (Piaget, 1977).

At institutional levels, technology can be irresponsibly viewed as the tool to solve all issues in education (Burch and Miglani, 2018). Technocentrism, coined by Papert (1987), considers technology as the inherently good agent of change. Often the conversation amidst technology-enhanced learning, specifically within developing countries, centres on which technology/tool itself. Researchers recommend we reject this neo-colonialist imposition of technology, citing an example where the burden of training for teachers to use One Laptop Per Child in Peru resulted in ‘amplifying unequal divides’ (Waldman-Brown et al., 2014: 16). This is supported by Corsini and Moultrie (2019) who likewise call for a need to acknowledge design versus tool, concluding that ‘design in humanitarian makerspaces is a key trigger for facilitating a broad range of impacts’ (Corsini and Moultrie, 2019: 10).

On the other hand, what about making for the sake of making? The maker movement and maker identity promote collaboration, innovation and tinkering versus instruction; Papert (1993) argues that ‘love is a better master of duty’. In this light, maker activities must be engaging enough to encourage participation and adhering to UNESCO’s framework can be limiting. Maker activity must also be flexible enough to meet any student's ability, for example Papert (1993) adapts a task of writing reports to students with low-literacy levels, instructing them to instead take and share photos of their work as documentation. Ultimately, where Tan & Calabrese-Barton (2018) caution the risk of building ‘trivial’ items, it is important to note that what may be considered valuable to make may be different for every child (and parent, if acknowledged as a stakeholder in the child’s participation).

It might not be too presumptuous to then suggest we ask users what they want to make, as offering choice can promote a sense of autonomy (Deci, 1992). Navigating the fine line of responding to needs to facilitate meaningful experiences, whilst also maintaining interest and excitement can be difficult. Leaving children open for options can also create negative confusing emotions without scaffolding (Hidi and Renninger, 2006). Corsini and Moultrie (2019) utilise a maturity grid tool, mapping maturity (development) against predefined impact goals (such as access, improved living conditions, psychosocial empowerment and education). Outlining goals with clear-defined levels, allows us to better measure impact but further research mapping specific maker activities. Chu et al. (2017) highlight this gap in research concerning the effects of maker activities and calls for research regarding the development of the maker themselves versus the transfer of technical skills. Making a clear distinction of the intended outcome will benefit here.

In a call for an inclusive science of child development, it would be beneficial to see more research mapping specific maker activities according to development and defined impact goals. Understanding user needs by involving children in the design process is fundamental to creating a clearly defined mission that better serves users.